Hey Y’all ~ Prepare to laugh when you read this! My brother, Chris, has a funny wit, and every once in a while, he’ll talk about contributing something humorous to be published here on Smelling Coffee. Keeping with the “Coffee” theme, he calls himself “Cappuccino with the Crawdad” – and he made me promise to publish this terrible picture of him along with any of his posts. But he’s so funny, publishing the ugly picture is worth it. I know you’ll enjoy…

There is nothing like taking church pictures to make you loose your religion.

It’s that time of the decade again. Once every five to ten years, in a traditional Baptist church anyway, the time rolls around to have family pictures made for a new church directory.

If you are not familiar with the process, here’s the way it works. You sign a list at church stating the date and time that your family will show up to have your picture taken. When that date and time arrive, you go to the church and sit in a Sunday School room until your name is called, which is usually about 30 minutes after your appointment. This waiting time works out great. It gives your kids plenty of time to do things like mess up their hair, pull their shirt tails out, and start asking “are we almost done”. Oh yea, and if you have a baby, it gives her time to pull her bow out, start crying, and get all red faced. Fortunately, our baby did not do that, but if she had wanted to she would have had plenty of time.

I have to admit that I was a little nervous about going for our pictures, not because I didn’t want my picture taken, but because of the sales pitch that was soon to follow. You know its going to be bad when there is only one photographer, and two sales people, and the two sales people together can not move families through as fast as the one photographer. More on that later.

As far as the picture taking goes, it went well enough. Our boys did a good job smiling, the baby didn’t cry, and I had not spilled anything on my shirt at lunch that day. The photographer was a silly fellow which helped to keep the kids attention and smiles. Even though we were lured to the church under the impression that we were going to be making a “family picture”, (that and the fact that we would receive a free 8×10,) the photographer saw the need to take a picture of every possible combination of every member of our family.

For our family this comes out to be five factorial. For all of you liberal art majors out there, in mathematics, the factorial of a non-negative integer n, denoted by n!, is the product of all positive integers less than or equal to n. In other words, 5! = 5 x 4 x 3 x 2 x 1 = 120. OK, so I’m a geek, get over it. I’m not sure if the photographer actually took that many pictures, but it sure seemed like it.

So finally we were called into a room with one of the sales people. She seemed nice enough, but from talking to friends who have already had their picture taken, I knew what was coming. The first thing we had to do was look at all of the pictures. This wasn’t so bad, and we used that opportunity to quickly weed down the number of pictures, and package options, that she would try to sell us.

Then came the sales pitch. She started off by showing us a picture of some old lady and another picture of the same lady with the “touch up” service applied to cover her wrinkles, spots, and shine. She went on to explain that the touch up service will help you to not look like you really look. But isn’t that the point of a photograph? She said it “preserves the likeness of you” whatever that means.

(Side note: that reminds me of the time one of my sisters, which I will not mention her name, wanted me to take a picture of her to use when she launched this blog. She kept looking at the pictures of herself and making comments like “That picture doesn’t look like me.” I had to say “Jennifer, that IS a picture of you.”)

The first thing she wanted to sell us was this huge framed picture of our family that must have been as large as a 42″ flat screen TV that had the caption “W.W.J.D” on it. No, actually I think it was some other Bible verse, but the point is the same. People will stick a religious saying or verse on about anything and market it to Christians. Don’t get me started on that….

I believe the number of packages she pitched to us was 9 factorial. (Remember factorial?) I managed to move her through them pretty quickly by responding to each with “Yea, we’re not really inter.. boys, get up off the floor” or “We don’t need that many.. son, get off of your brother and get back into your chair.” And so on, and so fourth. I don’t believe the sales pitch was as hard on us as it would have been if my boys hadn’t been right behind us reenacting every scene that they have ever played in Lego Star Wars. After about 15 minutes of that, I think she was ready for us to go.

She told us that we would get the free 8×10 when we came into the room. Of all of the other pictures we looked at, there was only one picture of our kids that we were interested in purchasing. When she finally got the point that it was the only picture we would buy, she started up-selling it hard. “How would you like an oval copy? How about one in this 24 carat gold plated frame? How about 48 wallet size photos, one for each of your grandparents and their dogs?”

I cut to the chase and asked “How much for just one 8×10 in black and white?” “$30” she said. As she was typing in the order, I saw that she added the “touch up”. I asked, “Is the touch up included?” She responded, yes, it’s included in the $30 price.” I asked, “how much is the picture without the touch up?” She mumbled under her breath “$20, but that helps cover wrinkles and shine.” Melissa made a good point “These are kids, they don’t have wrinkles, and the black and white picture takes care of the shine.” So we decided to go with the $20 option.

Once she figured our total price up, it came to $34. I said “What!? did you take the touch up out?” She said she did, and that in addition to the picture, they charge a $9 processing fee, and $5 shipping. I asked “Do we get the one 8×10 family picture free?” She said that we did. I asked “How do we get the picture?” She said that they mail it to us. I said “Well, if that’s the case, can’t you just process this one the same way you do the free one and include it in the same envelope?” She said “no” and handed me my paper to sign.

We ended up not getting the picture.

As we were walking out I heard the photographer say to another couple getting their picture taken “That didn’t get a smile. How about going on vacation without the kids … 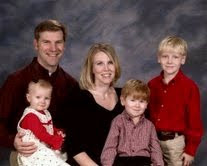 If you’re in for a few more laughs, you can read his other post here. 🙂
alt=rss

I'm a Jesus-loving, husband-loving, family-loving minister's wife and mom to two young adults. I study, teach, speak, and write for the greatest Boss in the universe. "Faith, Family, Food, Fun, and Living Life brewed in the fragrance of the knowledge of Jesus Christ in every place": That's what you'll find at SmellingCoffee.com

Just for fun: A Few of my Favorite People & Things

Most favorite people in the world: James (my husband), Nathan (my son), Abigail (my daughter), Mary (my mom), Gilbert (my dad, who now lives in Heaven), and my empty nest dog - Zoe (who has her own hashtag: #ZoeMyDoggy). And...I couldn't leave out my brother (Chris) and his family, my sister (Rebecca) and her family, or my Aunt Bibby - who, by the time I was three, taught me to drink from a china cup, eat shrimp cocktail, and how to shop with "lay away"! Favorite foods: Hazelnut coffee, milk chocolate, & cheesecake Favorite relaxation activities: Reading a Christian historical fiction book in a long bubble bath, after a 2 hour nap on crisp, clean sheets... mmmmm! Favorite Sport: SHOPPING!!! (very similar to hunting, I think)... Favorite shopping find: an 80% off sale, and snagging designer clothing for $3.99 at Goodwill. :-) Most frequently used daily Devotional Book: My Utmost For His Highest (Oswald Chambers) Bible Studies that have changed my walk with the Lord: Experiencing God (Henry Blackaby), Living God's Word (Waylen Moore), A Woman's Heart (Beth Moore), and Seeking Him (Nancy Leigh DeMoss Wolgemuth) Favorite Bible Verse... For now: Philippians 2:13 "It is God who gives you both the desire and the power to do what pleases Him."
Privacy & Cookies: This site uses cookies. By continuing to use this website, you agree to their use.
To find out more, including how to control cookies, see here: Cookie Policy

Y'all...this is a post that I hadn't planned on writing. Though I believe deeply in the sanctity of human life from the womb to the tomb, I have generally tried to keep … END_OF_DOCUMENT_TOKEN_TO_BE_REPLACED

Some Encouragement from a Newly Nesting Mom   Dearest mamas of graduating seniors, I’ve been thinking a lot about you lately. It’s only been three years since my youngest … END_OF_DOCUMENT_TOKEN_TO_BE_REPLACED

More Posts from this Category

The story Part 1 The story Part 2 And this is the happy ending~ In an unlikely place at a most inconvenient time, God brought the name James Walker across my path, and I … END_OF_DOCUMENT_TOKEN_TO_BE_REPLACED

For Part 1, click here.  :-) Part 2 ~ Continuing the repost from 2012   A few pages from my "Husband's Journal" Praying... and waiting {albeit not always … END_OF_DOCUMENT_TOKEN_TO_BE_REPLACED